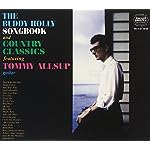 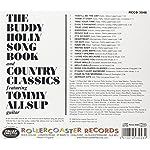 In 1964 Tommy Allsup moved back to Odessa from California and had an idea to cut an instrumental album of Buddy Holly hits. He felt the ideal place to record it was the Norman Petty Studio in Clovis, New Mexico, where the original hits were recorded. Tommy invited Jerry Allison to join him on the sessions, with Lynn Bailey on bass and George Tomsco on second guitar. By this time the Crickets were approaching the end of their association with Liberty Records and some of their last Liberty recordings were made in Clovis at the same time this album was made. Liberty producer Buzz Cason joined them on piano and the Buddy Holly Songbook album was released in the UK in 1964 and the US in 1965. We have remixed and remastered the tracks at Tommy’s request and added Tommy´s 2001 album of instrumental versions of country hits – Country Classics – all in Tommy’s great guitar style.