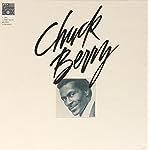 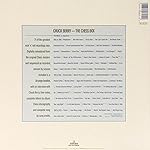 71 electrifying essentials by one of the most influential rockers ever: My Ding-A-Ling; Sweet Little Sixteen; School Day; Maybellene; Johnny B. Goode; No Particular Place to Go; Rock & Roll Music; Carol , and all those other hits join Downbound Train; Drifting Heart; Havana Moon; Betty Jean; Bye Bye Johnny , and more!

We may not know who wrote the book of love, but the author of the rock & roll dictionary was Charles Edward “Chuck” Berry. You’ve got a signature guitar riff that other giants (think Rolling Stones) have based entire careers on. Songs such as “School Day” told teen tales as though they were novels. “Too Much Monkey Business” in where Bob Dylan discovered poetry and rap music found a contemporary starting point. “Johnny B. Goode,” “Sweet Little Sixteen,” “Roll Over Beethoven,” “Back in the USA”–the titles alone evoke unparalleled rock atmosphere. If this three-CD set contains less unreleased ephemera than the usual box, it’s because there are so many essentials to squeeze in. This one’s got ’em all, A to Z. –Ben Edmonds

Not all the Chuck Berry you’ll ever need to hear, but close. Three pristine-sounding discs house seventy-one songs from the rock guitar pioneer’s 195~66 and 196973 reigns on Chess. Beginning with the country/R&B hybrid smash “Maybellene,” Berry’s twangy trademark licks and witty, literate lyrics have come to define rock’s first generation, and the prototypical classics are all included: “Rock and Roll Music,” “Sweet Little Sixteen,” and, of course, “Johnny B. Goode.” Berry’s blues content is also showcased, notably his first B-side, “Wee Wee Hours,” and mellow remakes of Charles Brown’s “Merry Christmas Baby” and Guitar Slim’s “Things that I Used to Do.” The boxed set includes a thirty-six-page booklet. — © Frank John Hadley 1993 — From Grove Press Guide to Blues on CD