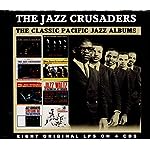 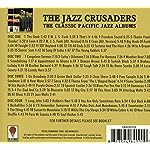 Formed in 1956 by Joe Sample (piano), Stix Hooper (drums), Wilton Felder (saxophone), and Wayne Henderson (trombone) – buddies from an early age out of Houston, Texas – The Jazz Crusaders had all been schooled in local centres of prayer. They first performed together at one of the city’s Creole churches, where they began to define their sound. The blend of Jazz, Blues and Soul which the young quartet developed throughout this formative period remained their default style during their early career. Having tried a number of short-lived names such as The Swingsters and The Nite Hawks, the founding members relocated to Los Angeles. On arrival, they stayed with family and friends, often sharing one room between them with a couple of mattresses on the floor. After changing their name to The Jazz Crusaders in 1961 (a nod to jazz great Art Blakey’s Jazz Messengers), the group signed with Pacific Jazz Records, a label with whom they would remain throughout the 1960s. Fronted by a two man horn section featuring trombone and tenor sax, the group’s sound was by now rooted in hard bop, with a nod still to R&B and soul. As The Jazz Crusaders, they released over a dozen albums before re-christening themselves The Crusaders in 1971, under which moniker they released a string of further albums in the jazz-fusion style, popular during the 1970s. This four disc boxset brings together the first eight albums by the Jazz Crusaders; all recorded for Pacific Jazz Records during the first half of the 1960s. Still held in huge esteem by Jazz critics and enthusiasts alike, this 4 CD collection, featuring over 5 hours of superb jazz, serves as both an ideal introduction to the Jazz Crusaders music, and as a welcome reminder of the group’s majesty, musicianship and style for those already well versed.