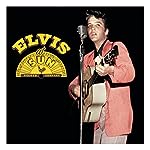 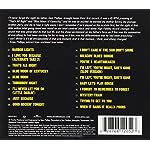 A comprehensive look back at Elvis’s Sun sides should be offered on vinyl as well as CD, right? It is, and this 19-track baby pretty much presents the birth of rock ‘n’ roll: That’s All Right; Blue Moon of Kentucky; Good Rockin’ Tonight; Mystery Train; You’re a Heartbreaker; Just Because; Blue Moon; Baby, Let’s Play House all the A- and B-sides plus rare alternate takes and snazzy packaging!

Though they would eventually be hailed as nothing short of the birth notice of rock ‘n’ roll, these seminal recordings–the product of a teenaged Memphis truck driver with virtually no public performance experience–were originally little more than energetic regional country hits that eventually led to a modest national record deal. Elvis Presley’s five Sun singles, along with nine additional demos and outtakes from the era, have been meticulously cleansed of the reverb and echo effects added to the later LP versions RCA issued during the singer’s meteoric rise to stardom, yielding a restored clarity that may startle even veteran Presley fans. Of course, it’s the performances themselves that remain indelible benchmarks of modern American music, a fusion of R&B, C&W, Tin Pan Alley pop, and irrepressible ambition that seemed wholly formed even on the first single’s pairing of the Arthur Crudup blues “That’s Alright” with a joyously supercharged revamp of Bill Monroe’s “Blue Moon of Kentucky.” What the core trio on these recordings–Presley, guitarist Scotty Moore, and bassist Bill Black–accomplished in their brief tenure at Sun was as preternatural as it was groundbreaking, yielding a mindset and sound that continues to reverberate around the globe over a half-century later. –Jerry McCulley