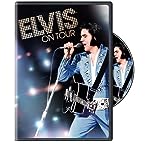 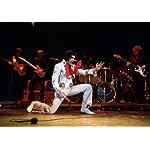 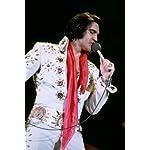 15 cities. 15 nights. Catch him if you can! The show is over but the fans cry out for what every Elvis Presley fan wants. More! Then, an announcer speaks the words the packed house doesn’t want to hear: “Elvis has left the building.” But what an incredible show lingers in minds and hearts. Elvis on Tour is the Golden Globe-winning Best Documentary chronicle of Presley’s whirlwind 15-cities/15-nights 1972 tour. They are nights to remember, paced here with more than 25 numbers that embrace the rocker Elvis, the gospel Elvis, the ballad Elvis, even the kung-fu Elvis. In between tour stops come more moments to treasure–montage sequences (supervised by Martin Scorsese) showcasing Presley’s early career and movies. More!

After the solid success of Elvis: That’s the Way It Is, and with his career as a movie actor having reached a standstill, Elvis Presley undertook a second concert documentary. Elvis on Tour trails after the King on a few concert dates in 1972, as he powers through a curious set list that downplays the classic hits in favor of the likes of “Polk Salad Annie” and “Proud Mary.” Rehearsal footage, preshow jitters, and after-hours sessions singing gospel with the gang are included; most revealing is a sequence that follows Elvis off stage and into his waiting limo, where he towels off in exhaustion, cracks a few jokes, and listens to the praise of the entourage. These glimpses are a logical counterpoint to the concert material; less explicable is the rundown of Elvis’s early years, which hardly fits the subject at hand–and frankly reminds us that Elvis looks pale and just a bit puffy at this moment in his life. The fun stuff includes a workout on the still-new “Burning Love” (Elvis has to read from a lyric sheet), committed takes on “Bridge over Troubled Water” and “I Got a Woman,” and a spirited “Never Been to Spain,” a song that fits Elvis’s taste for simple, dramatic builds. That, and Elvis giving a stage introduction to “the guy that gives me my water and my scarves and so forth.” The movie’s structure feels a little random, not that that will matter to fans. At times it catches the King looking undeniably weary of it all, except in those moments when a song really catches him (certainly during the gospel moments) and you see just how utterly “in the music” he was. The split-screen approach is intact, and the film’s “montage supervisor” was a young fellow named Martin Scorsese. Note about this 2010 edition: The original song that played under the opening credits, a cover of “Johnny B. Goode,” has been replaced (apparently due to rights issues) with a live “Don’t Be Cruel.” –Robert Horton