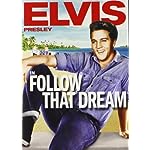 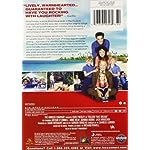 Elvis Presley is at his dreamboat peak in this musical comedy that finds the sexy star crooning five original songs in an “amusing and fast-paced” (Variety) romp boasting a “delightful mixtureof songs, romance, humor and good old homespun warmth” (Citizen-News)! When his scheming pop decides to “homestead” the family on a public beach, Toby Kwimper (Presley) digs the exotic settingbut hates the attention he is suddenly receiving. Though he just wants to play his guitar, Toby finds himself up to his baby blues in trouble with government bureaucrats, crime bosses and even two smitten “kittens”an adopted little sister who feels more than sisterly love for him and a social worker with more than his welfare on her mind!

Elvis hadn’t dyed his hair a permanent midnight black yet in Follow That Dream, which is another way of saying this is still the point in his career when he was making movies, not just Elvis Presley vehicles. Elvis road-trips with his crabby, anti-government pop (Arthur O’Connell) and an adopted brood to a Florida beach, which by a legal quirk they can homestead. The authorities and some fairly unbelievable gangsters would like to stop them. The songs are undistinguished but not awful, the scenery is nice, and Elvis–looking well-fed and relaxed–shows off good comedic chops doing a dumb-guy shtick. Screenwriter Charles Lederer and director Gordon Douglas are a class act by Presley picture standards, keeping the sitcom-style plot moving along. No fancy clothes or cars in this one, just Elvis and some beachcombing and an old git-tar, and not a bad time-killer for all that. –Robert Horton