Get Yer Ya-Ya’s Out! The Rolling Stones In Concert 40th Anniversary Deluxe 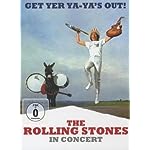 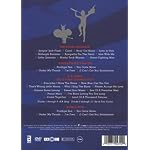 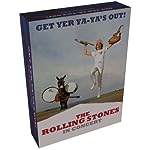 Deluxe four disc (three CDs + DVD) 40th Anniversary edition of this live release also contains a 56-page Collectors Book and a Postcard replica of the original Rolling Stones 1969 tour poster by David Byrd. The first CD is a remastered version of the original album. The second CD contains five unreleased tracks from the original Madison Square Garden concert. The third CD contains 12 never before released tracks by opening acts B.B. King and Ike & Tina Turner. The DVD features performances by The Rolling Stones from the two night concert at Madison Square Garden, backstage footage, scenes of Keith Richards in the studio and footage of the album cover shoot, all shot by Albert and David Maysles. The 56-page Collectors Book includes photos and an essay by the acclaimed photographer Ethan Russell, an original article by Lester Bangs from Rolling Stone magazine and remembrances from concert-goers. A limited number of boxes will also have an insert with a code to download ‘I’m Free’ (Live) for Guitar Hero 5.

Even after the deluge of Woodstock 40th anniversary commemorations we’ve seen this year, a new box set revisiting The Rolling Stones’ celebrated U.S. tour a couple of months after those three days of peace and music makes an invaluable addition to the pop music archives. “Get Yer Ya-Ya’s Out!: The Rolling Stones in Concert,” being released today, starts with the original 1970 live album, which has long stood as one of the great documents of one of rock’s cornerstone bands in absolute peak form.

That album, culled from two shows at Thanksgiving at New York’s Madison Square Garden, is supplemented in this four-disc package by a second disc comprising five tracks not included on the original set. A third CD captures the rest of the evening’s stirring opening sets by B.B. King and Ike and Tina Turner. The fourth disc contains film footage from the Stones’ tour shot by acclaimed documentarians Albert and David Maysles (whose 1964 footage of The Beatles’ first U.S. tour provided the inspiration for “A Hard Day’s Night”) for what would become the 1970 film “Gimme Shelter.”

There’s also a “super deluxe” set that includes the three music discs on vinyl as well as CD.

By the time of the Garden shows, guitarist Mick Taylor had replaced Brian Jones, who’d been fired a few months earlier and then died under mysterious circumstances. In November, “Let It Bleed” was just being released, so the heart of the Stones’ set list was the material drawn from that album and its 1968 predecessor, “Beggars Banquet.” (Yes, Virginia, once upon a time, the Greatest Rock ‘n’ Roll Band in the World was more interested in its newest songs than its classics.)

In fact, the big nods to the past were their versions of songs by a couple of their R&B and blues heroes: Chuck Berry’s “Carol” and “Little Queenie” and Robert Johnson’s “Love in Vain.” The bonus disc and the DVD capture a couple more: Robert Wilkins’ “Prodigal Son” and Fred McDowell and the Rev. Gary Davis’ “You Gotta Move,” which Mick Jagger and Keith Richards play as a virtual unplugged duo, Jagger sinuously singing while Richards applies a wicked slide to his old-school resonator guitar.

The Stones at this stage were still bona fide bad boys of rock — these shows took place less than two weeks before their appearance at the Altamont Motor Speedway, which would torpedo the hippie euphoria from Woodstock in August when Hells Angels hired by the Stones to provide security killed a fan.

Back-to-back renditions of “Midnight Rambler” and “Sympathy for the Devil” play out like the modern-day equivalent of the fabled midnight deal in which bluesman Johnson surrendered his soul for the ability to play and sing like nothing human.

The sound is sterling, Richards’ guitar soaring effortlessly over the nimble rhythm section work by bassist Bill Wyman and drummer Charlie Watts. As dramatic as are the cornerstone numbers, which also include “Honky Tonk Women” and “Street Fighting Man,” I still argue that the Stones never sounded more exhilarating than in the Berry-inspired “Live With Me.”

The Maysles’ film catches Richards and Jimi Hendrix hanging out backstage, comparing notes on a Plexiglas guitar; then Janis Joplin can be spotted looking on from the side of the stage. There’s also a curious separate snippet of film showing an impatient group of Stones biding their time at an airport waiting for an overdue plane along with Jerry Garcia and other members of the Grateful Dead.

The package also includes a 55-page book built around photos that Ethan Russell shot while on tour with the group. He also contributes text describing the unfolding of that tour — noting that before showtime, New York Philharmonic conductor Leonard Bernstein was hanging out backstage with Jagger.

Sandwiched in the middle is critic Lester Bangs’ Rolling Stone review of the “Ya-Ya’s” album when it appeared about a year later. It’s amusing to read even back in 1970 Bangs referring to worries about the future of rock music and how the form appeared to be in trouble, even though he thought the Stones sounded magnificent on the live album: “I’m beginning to think Ya-Ya’s just might be the best album they ever made.”

The remarkable thing is how many Stones aficionados would be willing to stand by that statement 40 years later. — The L.A. Times Music Blog, Randy Lewis, November 3, 2009

Get Yer Ya-Ya’s Out For Good: One of the greatest live rock albums of all time just got better
5 STARS

“GET YER YA-YA’S OUT!” – recorded in 1969 over two nights at Madison Square Garden – is the last official live document of The Rolling Stones in their swaggering Sixties prime; it’s also one of the greatest live albums of all time.

Expectations were high for the band on its 1969 tour, the Stones’ first in the U.S. in three years, and their first outing without guitarist Brian Jones, who had died that summer. They delivered in spades. Keith Richards and new guitarist Mick Taylor combined for angry workouts on Ya-Ya’s’ “Midnight Rambler” – the album’s bluesy nine-minute masterpiece – and a stark, rubbery “Sympathy For The Devil.” Mick Jagger and Richards pull apart Chuck Berry’s “Little Queenie” into a raunchy romp, as if to prove they had fully mastered the rock form.

This three-disc remastered Ya-Ya’s includes the original in all its gritty glory. Disc Two is a five-song EP from the same shows, with acoustic performances – “Prodigal Son” and “You Gotta Move” – from Richards (playing a resonator guitar) and Jagger. The third disc is an unexpected treat: blistering sets by openers B.B. King plus Ike and Tina Turner (doing an outrageously steamy take on Otis Redding’s “I’ve Been Loving You Too Long”). And serious rock geeks will enjoy the final flourish: the original ROLLING STONE review, by Lester Bangs. — Rolling Stone, Mark Kemp, October 29, 2009

Get Yer Ya-Ya’s Out! The Rolling Stones In Concert 40th Anniversary Deluxe Erreur : SQLSTATE[HY000] [2002] No such file or directory