Heart Of Mine – Love Songs Of Bob Dylan 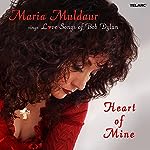 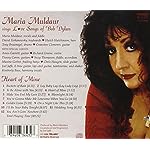 Â”I saw Maria in the great Martin Scorsese documentary about Bob Dylan, No Direction Home,Â” says Elaine Martone, production supervisor for the project. Â”She had recalled many great stories and anecdotes about the early days, and there was some great footage of her performing in the Village in the early Â60s with the Kweskin Jug Band. I was struck by the fact that sheÂd had a direct association with Dylan during his formative years, which I knew because she and I had spoken about from previous conversations. When Bob [Woods, executive producer] approached her about doing a recording of Dylan songs, she narrowed the focus and suggested an album of DylanÂs love songs. We thought that was an even better idea, and the result is a stirring, sensual album.Â”

Blues and folk chanteuse Maria Muldaur, a contemporary of Bob Dylan during his Greenwich Village heyday of the early Â60s, brings it all back home by delving into the various ballads and love songs in DylanÂs rich catalog and interpreting them in her own trademark style. Among the eleven tracks are Â”Buckets in the RainÂ” and Â”Meet Me in the Moonlight Tonight.Â”

The incomparable Maria Muldaur has always traversed a wide expanse of American music–in 2003, she recorded A Woman Alone with the Blues, a tribute to jazz icon Peggy Lee–and so perhaps it shouldn’t come as a surprise that she has now applied her interpretive gifts to the love songs of Bob Dylan. Choosing from among his classics (“I’ll Be Your Baby Tonight”) and lesser-known works (“Golden Loom”), Muldaur bravely recasts several songs in disparate grooves (reggae, Cajun, swing), and even allows keyboardist David Torkanowsky to sneak a few bars of the jazz standard “Ain’t Misbehavin'” into the end of “Moonlight.” As expected, Muldaur is most at home with lazy, country-blues treatments (“Buckets of Rain”). But she can also effectively pull off the intense drama of total sublimation, especially on “Wedding Song” and “Make You Feel My Love,” which she renders so tenderly as to elicit a tear. The title track finds her trying to talk herself out of an unsuitable lover, yet one suspects she won’t be able to outsmart her heart. On both “Lay Baby Lay” (the gender-switching version of “Lay Lady Lay”) and “You’re Gonna Make Me Lonesome When You Go,” she eschews Dylan’s urgent and poignant sexuality for sensuality, making both songs a study in how the sexes approach the chemistry of love. –Alanna Nash

I remember well the deep, fervent, compassionate and amazingly perceptive voice that Dylan brought to the many social issues of the early and mid-Â60s during his Village heyday. It occurred to me,that while Dylan is mostly known for his scathing, perceptive, brutally honest and insightful songs of social consciousness, he has in fact, over the years, written many deeply passionate, poignant and moving love songs. Maria Muldaur

Â”Muldaur approaches her material with a jewelerÂs precision, cutting each tune scrupulously into a fine gem. She can sing circles around the young thrushes who dominate todayÂs pop charts.Â” – San Francisco Chronicle

Maria MuldaurÂs musical roots run deep. Born and raised in New York CityÂs Greenwich Village, Muldaur was surrounded by bluegrass, folk, jazz, blues and gospel, but her very first musical influences were from the records of country and western singers Hank Williams, Kitty Wells, Hank Snow and Ernest Tubb. At age five, she would sing Kitty WellsÂ Â”It WasnÂt God Who Made Honky Tonk AngelsÂ” while her aunt accompanied her on the piano. As a teenager, Maria tuned into early rhythm and blues and was an avid fan of Fats Domino, Little Richard, Clyde McPhatter and Ruth Brown. She became interested in the girl groups coming onto the scene and formed her own, The Cashmeres, while in high school.

As pop radio became less soulful, Maria turned to the wealth of American roots music that was being rediscovered right in her own backyard. On any given day, she could stroll through Washington Square Park in the Village and hear blues, jug band, gospel and old-timey music. Soon she was hanging out and joining in on nightly jams and song swaps called hootenannies.

In the Village, Maria soon became involved with The Friends of Old Timey Music, a group of that traveled to the rural South to find legendary artists like Doc Watson, Bukka White, Skip James and Mississippi John Hurt, then bring them north to present them in concert to urban audiences. Aspiring young musicians like John Sebastian, Bob Dylan, John Hammond, Jr. and Muldaur were both pursuing and creating a new wave in American roots music.

Â”We used to have after-hours jams on Saturday nights,Â” says Maria. Â”Blues legends like the Reverend Gary Davis would come over. I found myself sitting at the feet of not only him, but Mississippi John Hurt, Son House and blues diva Victoria Spivey.Â” Deeply inspired by the pure mountain music of Doc Watson and the Watson Family, Maria left the intense New York scene and traveled to North Carolina to learn fiddle. During her extended visits with the Watson family, she soaked up Appalachian music and culture from the nightly gatherings on DocÂs back porch.

After returning to New York from one of her Southern excursions, Maria was approached by John Sebastian, David Grisman and several friends who had formed a jug band and were about to record for Spivey Records. Victoria Spivey, owner of the label, encouraged the young band members to add Maria to their Even Dozen Jug Band. In preparation for the recording, Maria and her bandmates pored through hundreds of old blues and jug band 78s.

Â”This was my first exploration of early blues and it was during this time that I first heard the early recordings of Memphis Minnie,Â” Maria recalls. Â”I was deeply moved and influenced by her raw, soulful sound. To this day she remains one of my main musical inspirations. I avidly listened to all of the early women blues singers and added many of Bessie SmithÂs and Ma RaineyÂs bawdy songs to my repertoire. Before I knew it, Victoria Spivey took me under her wing and with her encouraging tutelage, I was singing the blues!Â”

When her bandmates went off to college, Maria migrated to Boston and joined the popular Jim Kweskin Jug Band. Her first recorded song with them was Â”IÂm a Woman,Â” the anthem of feminine power and joyful sexuality. It has been her theme song ever since. The Kweskin Band recorded several albums together and during this time Maria married and had a daughter, Jennie, with fellow bandmate Geoff Muldaur. When the group disbanded in 1968, the couple remained with Reprise, recording two acclaimed albums, Pottery Pie and Sweet Potatoes. By this time, they were residing in Woodstock, New York and became part of a new musical community that included Bob Dylan, The Band, Paul Butterfield, Janis JoplinÂs Full Tilt Boogie Band and many other notable artists. These musicians had already made the transition from acoustic folk music to a more full-blown contemporary (and lucrative) electric sound. The musical environment was fertile and led to creative collaboration. Â”During numerous all-night jam sessions, musicians like Paul Butterfield and Rick Danko encouraged me to express myself with the raw power and energy that would equal the intensity of their playing.Â” Ironically, it was Geoff who joined Butterfield to form Better Days, thus dissolving the musical and marital partnership with Maria.

On a visit to New York City, Maria had a chance encounter with Mo Ostin, the president of Reprise Records. Upon learning that she and Geoff were no longer together, Ostin offered Maria the opportunity to make her first solo album. Maria Muldaur went platinum in two years and forever enshrined Maria in the minds of baby boomers the world over. Â”Midnight at the OasisÂ” remains to this day a staple song on multi-format radio. Four albums on Warner Brothers followed including her acclaimed second disc, Waitress in a Donut Shop, which contained her next hit single, a remake of Â”IÂm A Woman.Â” She invited her friends and musical heroes to join her musical adventures and the list is a whoÂs who of the true lasting greats in American music: Dr. John, Ry Cooder, Paul Butterfield, Lowell George, Linda Ronstadt, Stevie Wonder, Jr. Walker, James Booker, Benny Carter, J.J. Cale, Kenny Burrell, Doc Watson and Hoagy Carmichael to name a few.

In the eighties, Maria recorded two critically acclaimed jazz albums, two gospel albums and one album of swing tunes for Â”kids of all ages.Â” Sweet and Slow, a duet album with longtime collaborator Dr. John, featured songs by Fats Waller, Duke Ellington and another of MariaÂs blues heroines, Sippie Wallace. She also toured extensively with her band both in the States and abroad. Her frequent gigs with Dr. John led to a growing appreciation and fondness for the New Orleans sound. She incorporated that flavor into her own musical repertoire and dubbed this gumbo of straight ahead blues, R&B and Louisiana music, Â”bluesiana.Â”

In 1992, Maria signed with Black Top Records. Louisiana Love Call, recorded in her beloved New Orleans, came at a time when American roots music began to experience a gigantic worldwide surge in popularity. The album featured guest appearances by Dr. John, Aaron and Charles Neville, accordionist Zachary Richard and guitar guru Amos Garrett. Instantly embraced by critics and fans alike, with impressive accolades coming in from everywhere, Louisiana Love Call was hailed as the best album of her career. Rolling Stone, People, Entertainment Weekly and Billboard, adult alternative radio and blues radio raved. The album was awarded Â”Best Adult Alternative Album of the YearÂ” by the National Association of Independent Record Distributors. She also garnered a nomination for Â”Outstanding Blues AlbumÂ” from the Bay Area Music Awards. The follow-up, Meet Me at Midnite, also won wide critical acclaim and was nominated for the WC Handy Blues Award. Maria holds the distinction of being Black TopÂs best-selling artist.

Continuing her love affair with the Â”bluesianaÂ” sound, Muldaur made songwriter Bruce CockburnÂs Â”Southland of the HeartÂ” the title cut for her second Telarc recording in 1998. As People magazine wrote, Â”Muldaur has got the bluesÂ once you zero in on the emotional nuances of her finely weathered drawl, youÂll hear an inspired change of heart Â her voice becomes an oasis for troubled souls.Â”

Dedicated to the incomparable pianist/vocalist Charles Brown, her 1999 release, Meet Me Where They Play the Blues, featured the last recorded appearance by the inventor of the Â”West Coast Blues.Â” Too ill to make it into the studio, BrownÂs vocals on Â”Gee Baby, AinÂt I Good to YouÂ” were recorded in a nursing home. In fact, Muldaur had originally chosen many of the songs for this project with BrownÂs piano playing in mind. Brown died that same year, but the music and spirit of this great Texas blues balladeer live on through this amazing project.

MuldaurÂs more recent Tealrc efforts include A Woman Alone with the Blues, a 2003 tribute to jazz icon Peggy Lee, and the equally jazzy Love Wants To Dance, a 2004 collection of songs about loveÂs alternately bright and melancholy sides. Heart of Mine, a collection of love songs originally penned by legendary folk balladeer Bob Dylan, is scheduled for release in August 2006.