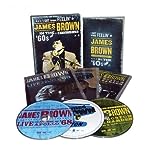 I Got The Feelin’: James Brown in the ’60s features the director’s cut of The Night James Brown Saved Boston and the full-length concert performances James Brown Live at The Boston Garden from April 1968 and Man to Man – James Brown Live at The Apollo Theater 1968. This definitive 3-DVD collector’s box set is brimming with a special deluxe booklet and extensive bonus content such as James Brown’s legendary performance of “Out of Sight” from The T.A.M.I. Show, interviews with James Brown’s band members, friends and colleagues, additional audio from the radio simulcast of his Boston Garden Live performance 1968, rare performance footage culled from the archives and much more! A fitting tribute to the man and the times, this DVD collection pays homage not only to James Brown’s enormous contribution to American music, but also reveals his often overlooked impact on American race relations.

“As riveting a record of that time and place as you could hope to see.” — NPR