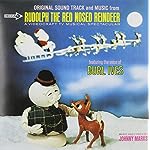 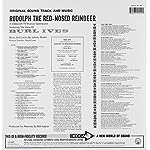 The Rankin/Bass animagic film Rudolph the Red-Nosed Reindeer first appeared on December 6, 1964. Since then, it has become the longest-running of all holiday TV specials (with, we hope, no end in sight). It’s fitting that the grandfather of all Christmas specials features Burl Ives, still remembered warmly by millions as the voice behind the film’s narrator, Sam the Snowman. Although this soundtrack bears his name, Ives appears only on a handful of songs: “Rudolph the Red-Nosed Reindeer,” “A Holly Jolly Christmas,” and “Silver and Gold.” The remaining vocals are handled by various cast members: “Jingle Jingle Jingle” features Stan Francis as Santa; “We’re a Couple of Misfits” is sung by Billie Mae Richards (the voice of Rudolph) and Paul Soles (the voice of Hermie); “There’s Always Tomorrow” is immortalized by Janet Orenstein (as Clarice), and a chorus shares “The Most Wonderful Day of the Year.” The real musical genius behind the movie is Johnny Marks, a songwriter who had earlier written the song “Rudolph the Red-Nosed Reindeer” as well as holiday favorites like “Rockin’ Around the Christmas Tree” (which is featured in a medley here). His songs, in the hands of musical director Maury Laws, simply sparkle with Christmas magic. The second half of the soundtrack features instrumental versions of the songs, featuring the Decca Concert Orchestra conducted by Herbert Rehbein. The instrumentals keep the holiday spirit flowing, but it’s the equivalent of a long musical intermission (in other words, you’ll probably find yourself straightening out candy canes on the tree before long). Few soundtracks hold as many happy memories or contain as much Christmas spirit as Rudolph the Red-Nosed Reindeer. Hardcore fans (who number more than a few) can also purchase the film in DVD format or check out a book from Rick Goldschmit that chronicles the making of the film (with lots of fascinating facts about the film’s history). ~ Dave Connolly