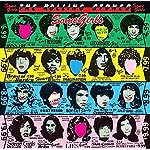 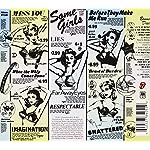 Digitally remastered deluxe two CD edition of The Rolling Stones’ 1978 masterpiece including a bonus disc of previously unreleased recordings taped during the Some Girls sessions. A fresh, uncompromising attempt to incorporate then-modern pop techniques into the band’s familiar sound, Some Girls opens with the Disco sass of “Miss You” and closes with the self-destructive punk of “Shattered.” In between, you have an album that solidified their reputation as the world’s greatest Rock ‘n’ Roll band. Some may cite Exile On Main Street as their finest ’70s moment, but Some Girls is it’s equal, if not a smidgen more exciting.

Universal Music Group and The Rolling Stones are pleased to announce the release on November 21, 2011 of the re-mastered, expanded, Super-Deluxe, Deluxe and Digital editions of Some Girls, the groundbreaking album which introduced the music of The Rolling Stones to a whole new generation of fans.

Justly considered one of the finest works by Mick Jagger, Keith Richards, Charlie Watts, Bill Wyman and Ronnie Wood, Some Girls topped the US charts over three decades ago and remains the best selling album of their storied career. This new package will include some undiscovered gems that include tracks that have recently been unearthed from The Rolling Stones vaults by producer Don Was.

Some Girls is The Rolling Stones’ most direct and diverse collection of material, from Mick Jagger’s irresistible falsetto on the four-on-the-floor filler Miss You, their eighth US number one, to the country-flavoured Far Away Eyes via the Chuck Berry meets punk snarl of Respectable. And let’s not forget the sensuous, Beast Of Burden, one of Keith Richards’ finest tunes, which reached number 8 on the US singles chart, the garage rock of Shattered, the album’s third US Top 40 entry, and the soulful swagger of the group’s version of The Temptations’ Just My Imagination (Running Away With Me), another timeless offering in their canon of classic Stones Motown covers.

Following the critical praise and commercial success afforded the re-mastered, expanded editions of Exile On Main Street, which matched the chart performance of the epochal 1972 album, and returned The Rolling Stones to their rightful place at the top of the British charts in 2010, the extensive reissue of Some Girls constitutes the next step in the band’s ongoing relationship with Universal Music Group. This started in April 2008 with Shine A Light, the soundtrack from the stunning concert film directed by Martin Scorsese, and has encompassed the reissues of The Rolling Stones re-mastered, post-1971 studio albums, several live albums and classic compilations, and the exhaustive box-set Singles 1971-2006 earlier this year.

Some Girls holds a special place in the history of The Rolling Stones and demonstrates why they remain one of the most thrilling and influential bands of all time. The 1978 album features a Keith Richards’ classic Before They Make Me Run, a signature song he stills performs defiantly to this day. Some Girls documented Mick Jagger’s love of 70’s funk reflected in Miss You, the dance track that wrongfooted many people, made the club and black charts, and made it okay for other mainstream acts at the time to `go disco’.

The 1978 album courted controversy because of Jagger’s tongue-in-cheek lyrics on the title track, on Miss You and on Respectable, perceived as a retort to the punk and new wave groups who had borrowed so much attitude and copped so many anti-establishment moves from The Rolling Stones. Ironically, the furore around the elaborate Some Girls package, designed by Peter Corriston and featuring the band members in drag – a nod in the direction of the picture on their 1966 single Have You Seen Your Mother, Baby, Standing in the Shadow? – and likenesses of Lucille Ball, Farrah Fawcett, Raquel Welch, Judy Garland and Marilyn Monroe that hadn’t been legally cleared, necessitating a swift withdrawal and rethink.

Some Girls demonstrated the distinctive and definitive riffing from Keith Richards, with its abundance of unstoppable licks and majestic power chords driving the band into its brand new musical direction. This album not only defined him and his playing, but also defined a new era for The Rolling Stones, which Richards since described as a `sense of renewal’. Some Girls marks the only other time since recording Satisfaction where Richards used an effects pedal to `elevate’ the sound.

The album cemented the position of guitarist Ronnie Wood, who had joined in 1975, and added his trademark slide and pedal steel playing to several of the album’s most memorable tracks, including When The Whip Comes Down and Shattered. He also co-wrote the Shattered B-side Everything Is Turning To Gold. Some Girls also marked a move to the Pathé Marconi Studios in Paris for the Glimmer Twins production team of Jagger and Richards. These factors helped what is arguably the group’s most focused and dynamic album, driven by the sans pareil rhythm section of drummer Charlie Watts and bassist Bill Wyman. Some Girls featured fewer guest musicians than any Rolling Stones albums since 1971, but the contributions keyboard-player Ian McLagan, Wood’s bandmate in The Faces, saxophone-player Mel Collins, and harmonica-player Sugar Blue – discovered busking on the Paris métro – made Miss You in particular sound brighter than ever.

Amongst many eagerly-awaited extras, the Super-Deluxe edition of Some Girls will include a stunning, previously unseen Helmut Newton photo session from 1978, an essay by esteemed author and journalist Anthony DeCurtis putting the album in its cultural context, and a 7″ single of Beast Of Burden/When The Whip Comes Down in its banned sleeve.

Thirty-three years on from its original release, the re-mastered, expanded, Super-Deluxe, Deluxe and Digital editions of Some Girls show why the 1978 album has often been hailed as the equal of Exile On Main Street. Some Girls is both a time capsule and a timeless listen. It features the band at their tightest and toughest, at their most vibrant and vital. It’s an all-killer, no-filler, must-have album. It still packs a punch.

SOME GIRLS – now bigger, brighter and better than ever.