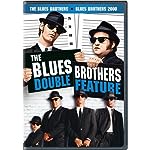 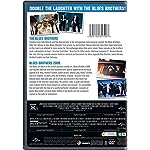 Double the laughter with The Blues Brothers! The Blues Brothers: Comedy icons John Belushi and Dan Aykroyd star in the outrageously funny musical comedy The Blues Brothers. After the release of Jake Blues (Belushi) from prison, he and brother Elwood (Aykroyd) take their blues band back on the road in an attempt to raise money for the orphanage where they were raised. Havoc ensues as the brothers seek redemption on their “mission from God”. Directed by John Landis (National Lampoon’s Animal House), the soul-stirring comedy classic features musical performances by blues legends Ray Charles, James Brown, Aretha Franklin and Cab Calloway. Blues Brothers 2000: The Blues are back in this action-packed comedy hit, Blues Brothers 2000, starring Dan Aykroyd and John Goodman with special appearances by music legends B.B. King, Aretha Franklin, James Brown, Johnny Lang, Blues Traveler, and Eric Clapton. Eighteen years after the Brothers’ original ‘mission from God’, Elwood Blues (Aykroyd) gets out of prison and discovers that much has changed in the time he’s been away. His partner, Jake, is gone, his band is no longer together and the orphanage where he grew up has been demolished. Elwood soon realizes that he must embark on a whole new mission – to reassemble the old band with the help of a soulful bartender (Goodman), compete at Queen Moussette’s (Erykah Badu) Battle of the Bands and set a wayward orphan on the path to redemption.