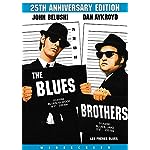 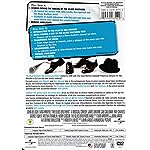 The bonus features on The Blues Brothers (25th Anniversary Edition) are good enough that you’ll wish there were more of them. On side A of the two-sided disc, “Stories Behind the Making of The Blues Brothers” is an excellent 56-minute retrospective (included on the previous DVD release) that fully captures the spirit of the film’s exuberant production, highlighted by interviews with nearly all of the primary cast and crew, plus on-set footage (including the late John Belushi) from a vintage behind-the-scenes promo film. On side B, the “Introduction by Dan Aykroyd” is cursory at best, and at 22 seconds it’s way too brief (perhaps because Aykroyd’s anecdotes can be found in the retrospective). “Going Rounds: A Day on the Blues Brothers Tour” is a seven-minute featurette showing Aykroyd and Jim Belushi as the 2005 incarnation of The Blues Brothers, and… well, hey guys, maybe it’s time to hang it up and admit that it’ll never be the same without John. Your time is better spent on the 15-minute featurette “Transposing the Music,” which chronicles the spin-offs inspired by the film, and includes interviews with Aykroyd, John Goodman (costar of The Blues Brothers 2000), composers Howard Shore and Paul Shaffer, and others. “Remembering John” is an essential tribute to Aykroyd’s inimitable Saturday Night Live and Blues Brothers costar, with fond and funny remembrance by Aykroyd, director John Landis (one of Hollywood’s funniest raconteurs), Belushi’s widow Judy Belushi-Pisano, and others who were close to the late comedy legend. It’s a fitting honor to one-half of the great, original Blues Brothers duo, immortalized by Landis’s 1980 hit, which is looking more and more like a classic with each passing year. –Jeff Shannon