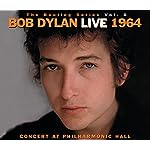 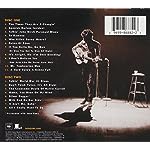 The next installment in the Dylan Bootleg Series is a Halloween night show recorded 10/31/64 at NYC’s Philharmonic Hall and originally intended for release as a live album. Dylan biographer Robert Shelton calls this show “one of his greatest concerts,” and it’s certainly got its share of firsts and highlights, including the only known live version of Spanish Harlem Incident ; the premiere of the songs Gates of Eden and If You Gotta Go, Go Now , and four duets with Joan Baez. With a 52-page book.

The brooding Bob Dylan of the 1966 live collection in the Dylan bootleg series gave way to an even more hooded character on the second live bootleg album from 1974. Which makes the jump back to a younger Dylan in this set all the more jarring. Here is Dylan as an eager-to-please 23 year old with nothing between him and his worshippers but a guitar, a harmonica, and, for four songs, his lover, Joan Baez. In marked contrast to the acerbic electric Dylan of the mid-’60s and the tight-lipped living legend of the mid-’70s, here is Dylan as entertainer. Joking and bantering with the crowd, Dylan deals up some favorites (“The Times They Are A-Changin’,” “Don’t Think Twice, It’s All Right”), but is already shedding his earnest folkie persona; imagine another artist a mere two years into his career declining to perform a hit on the scale of “Blowin’ in the Wind.” But Dylan was moving fast. Having completed the last all-acoustic collection of his early years three months before the Philharmonic concert, he would record the half-electric/half-acoustic Bringing It All Back Home three months later. Three of the four acoustic songs from that album are presented here, as are a handful of then-unreleased songs, including “Talkin’ John Birch Paranoid Blues,” “If You Gotta Go, Go Now” (which was soon given a rock arrangement), and a protest-period remnant, “Who Killed Davey Moore?” Had Concert at the Philharmonic Hall appeared the year it was recorded, it would been seen as a respite for folk fans to catch their collective breath before Dylan reappeared in his rock & roll Rimbaud guise. Heard for the first time decades later, it’s simply a testament of his gifts as a showman and songwriter. –Steven Stolder