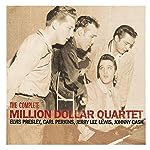 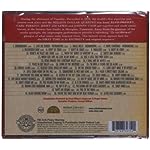 The 50th anniversary edition of this historic jam session with featuring Elvis Presley, johnny cash, jerry lee lewis and carl perkins; for the first time ever containing the complete recorded session in the original sequence with 12 more minutes than any previous release!. during the afternoon of tuesday december 4, 1956, the world’s first superstar jam session took place and the million dollar quartet was born! Elvis, john, jerry lee, and carl sang and performed their favourite songs at the famous sun studio in downtown memphis, tennessee. includes an informative new essay by sun label expert colin escott.

Fifty years after a 21-year-old Elvis Presley first shook the world comes a reissue of the famed Million Dollar Quartet recording, the off-the-cuff Sun Records jam session where Jerry Lee Lewis, Carl Perkins, and Johnny Cash joined Presley for a loose-jointed romp through 46 songs. Except that’s not quite right–Cash either put down his part off-mic or rolled out his big baritone-bass when the tape wasn’t rolling (the more likely explanation). So that, as Colin Escott writes in his liner notes, technically makes this a $750,000 Trio. And while this new edition is billed as the “complete” quartet–since 12 more minutes surfaced on a tape of superior sound quality found in Elvis’s private collection, and the session is now in its right sequence–it obviously isn’t the whole thing. (The 12 extra minutes are essentially four short instrumentals and “Reconsider Baby” at the start, as well as bits and pieces at different points throughout the CD.) But what survives is nevertheless fascinating, of course, not only for the historical record but for the fervor the three bring to a handful of spirituals (their finest moment) and how young Presley–who is already recording for RCA, and has just been dropped by Sun–presents himself. His new notoriety brings out a cocky charm, as he devotes much of these renditions of “Don’t Be Cruel” and “Paralyzed” to an imitation of Jackie Wilson imitating him (Elvis knows Wilson only as one of Billy Ward’s Dominoes), and boasting that Pat Boone recorded a song that Elvis wouldn’t even audition. This fly-on-the-wall voyeurism should appeal to any student of rock ‘n’ roll history. But serious Elvisphiles will especially enjoy hearing Presley talk about the seeds of recording “That’s When Your Heartaches Begin,” mimic Hank Snow on “I’m Gonna Bid My Blues Goodbye,” and express bemused ire over Faron Young, who had sent him a song (“Is It So Strange”) he hoped Elvis would record. “He didn’t want to give me none of it–he wanted it all, you know,” Elvis says with a chuckle, supposedly referring to the publishing/writing credit, something Elvis’s manager, the iron-fisted Colonel Tom Parker, demanded. As the trio moves through a plethora of material–Christmas songs, gospel, blues, R&B, country, pop, Dixieland, cowboy, and bluegrass–they become the hammer, anvil, and steel, forging a new form of music. What you have here, then, is no less than the sound of it, taking shape. –Alanna Nash