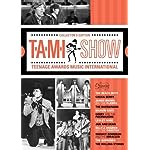 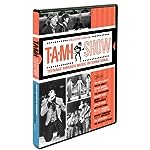 In the top three of all rock movies . . . – Quentin Tarantino

It is the Greatest, Grooviest, Wildest, Most Exciting Beat Blast Ever to Pound the Screen!

Filmed just eight months after The Beatles appeared on The Ed Sullivan Show, THE T.A.M.I. SHOW introduced rock n soul youth culture to America in the first concert movie of the rock era. One of the rarest and most sought-after performance films from its time, the 1964 concert event featured future Rock and Roll Hall of Famers The Rolling Stones, James Brown, Chuck Berry, The Beach Boys, Marvin Gaye, Smokey Robinson & The Miracles, The Supremes and many other American and British Invasion hitmakers in their prime.

This legendary film has never been available on DVD and has not been seen in its entirety since it originally appeared in theaters in 1964. Mastered from a new High Definition transfer and UNCUT, this complete version features The Beach Boys performances that were removed following the films initial theatrical run. This is what music fans have been waiting for: the ultimate collectors edition of this long-unavailable landmark film.

* (Here They Come) From All Over The World

* Its Gonna Be Alright

* Thats What Love Is Made Of

* Youve Really Got A Hold On Me

* Can I Get A Witness

* You Dont Own Me

* You Didnt Look Around

* The Little Old Lady (From Pasadena)

* I ll Keep You Satisfied

* When The Lovelight Starts Shining Through His Eyes

* Where Did Our Love Go

* Time Is On My Side

* Its All Over Now

* Show Close: Lets Get Together

Filmed in 1964 at the Santa Monica Civic Auditorium, this is arguably the very best rock-concert movie ever made, packed start to finish with nearly two hours of absolutely essential performances by an unprecedented group of American and British rock, pop, soul, and Motown legends. Dig this lineup: Marvin Gaye, the Supremes (look for Teri Garr as one of the dancers during “Where Did Our Love Go?”), Chuck Berry, Smokey Robinson and the Miracles, Gerry and the Pacemakers, Leslie Gore, Jan and Dean, a phenomenal James Brown and the Flames, followed (!) by The Rolling Stones rising to the occasion after Brown’s legendary performance (Keith Richards has said that performing after Brown was perhaps the biggest mistake the band ever made). Never released on home video, The T.A.M.I. Show was the holy grail of rock-concert movies. Those who have had to make do with substandard and incomplete bootlegs will agree that it was worth the wait for this collector’s edition that restores the long-lost Beach Boys set (listen to director Steve Binder’s audio commentary for the story behind its removal). –Donald Liebenson