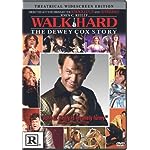 One of the most iconic figures in rock history, Dewey Cox (John C. Reilly) had it all: the women (over 411 served), the friends (Elvis, The Beatles) and the rock ‘n’ roll lifestyle (a close and personal relationship with every pill and powder known to man). But most of all, he had the music that transformed a dimwitted country boy into the greatest American rock star who never lived. A wild and wicked send-up of every musical biopic ever made, WALK HARD: THE DEWEY COX STORY is gut-busting proof that when it comes to hard rocking, living and laughing, a hard man is good to find.

The Pixar-like roll of Judd Apatow (The 40-Year-Old Virgin, Knocked Up, Superbad) continues with another sure-fire hit. In charting the meteoric rise, catastrophic fall and Lazarus-like rise of rocker Dewey Cox, Walk Hard parodies the classic Hollywood bio-pic, cashing in mostly on Walk the Line. John C. Reilly, one of Hollywood’s most solid character actors, makes the most of his Golden Globe-nominated star turn as Dewey, whose road to stardom is paved with a childhood tragedy that claims the life of his prodigiously talented brother (“The wrong kid died,” is his father’s mantra), instant stardom (his first record is a hit just 35 minutes after it was recorded), sex and drugs, and the inevitable “dark (effen) period” that leads him to rehab. Reilly gets solid backup from current and former Saturday Night Live alumni, including Kirsten Wiig as his incredibly fertile first wife who has no faith in his musical aspirations (“You’re never going to make it,” she cheerily ends one phone call); Tim Meadows, never better, as Dewey’s drummer, who, in one of the film’s best scenes, does a poor job of dissuading him from trying marijuana); and Chris Parnell as his bass player. Jenna Fischer leaves Pam back at The Office as Darlene, Dewey’s virtuous duet partner. Hilarious cameos give Walk Hard a great “Hey!” factor: Hey, that’s Frankie Muniz as Buddy Holly. Hey, that’s “Kenneth” from 30 Rock. Hey, there’s Jack Black and Paul Rudd as–no kidding–Paul McCartney and John Lennon revealing “a rift in The Beatles.” Some of the jokes are obvious (come on; the guy’s last name is Cox), others inspired. But the decades-spanning music, echoing the styles of gritty Johnny Cash, romantic Roy Orbison, obtuse Bob Dylan, trippy Brian Wilson, and even a bit of anachronistic punk rock, is as pitch perfect and affectionately observed as in The Rutles, This Is Spinal Tap and A Mighty Wind. Walk Hard earns its R-rating, particularly for a sure-to-be-talked-about scene of hotel-room debauchery. But: Hilarious? Outrageous? Twisted? To quote the title of one of Dewey’s hit songs, “Guilty as Charged.” –Donald Liebenson